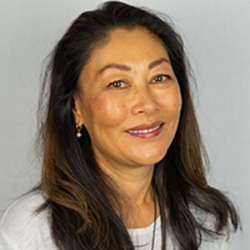 Linda Ong
Chief Culture Officer at Civic Entertainment Group
Linda Ong is the Chief Culture Officer at Civic Entertainment Group, a Seacrest Global Group Company, one of the nation’s most award-winning marketing agencies. As head of the cultural insights practice, Ong leads a team of analysts devoted to helping clients navigate consumer sensibilities in fast-changing times. By translating cultural shifts into actionable takeaways, she and her team ensure that brand marketers, content creators and researchers stay ahead of the curve with their audiences.

It started with a coffee can.

As an only child in the 70s, growing up on a cul-de-sac in the piney suburbs of Houston, I often found myself having to make my own play. While waiting for the neighborhood kids to free themselves from Sunday school or Little League, I found projects for myself, like collecting old keys, alphabetizing and Dewey-decimal-ing my bookshelf, or chasing lizards in the backyard with a Folger’s coffee can.

One Labor Day, my mom had the television tuned into Jerry Lewis’ famed, annual Labor Day fundraiser for muscular dystrophy. A precursor to what’s now the standard celebrity telethon gig (show up for a few hours, answer a few phones and read a couple of prompter lines), it was my first exposure to the idea of activism.

I don’t know, and never have known, anyone with muscular dystrophy. My upbringing was not particularly attuned to public or community service. But something about the idea of helping others in need really spoke to the 7-year old in me. I took my coffee can, emptied it of lizards, and started knocking on the fifteen other doors of our little street, asking for donations.

Perhaps it was the odd sight of the little-Asian-girl-next door asking for money in an upper-middle-class, best-public-school district community, but my coffee can was soon stuffed with bills. I asked my dad to drive me to the local TV station where we waited in line to donate the cash, along with plenty of other kids and families who had felt the same call.

As an adult, I’ve always been pulled to causes, but never committed myself wholly to anyone in particular. At different points in my career, I’ve made a point of dedicating pro bono time to an array of organizations, typically for a year or more at a time. I’ve never marched in a protest (don’t like crowds), but I helped rebrand pit bulls and an esteemed public music conservatory.

But channeling the collective anguish of witnessing George Floyd’s brutal death, the pain of protests, and frustration over lack of leadership from the current administration has caused me, like many of you, to ask myself: What is the role I can play in society right now? How can I use the tools and platforms at hand to help make a change?

This is a human rights emergency. How can you help?

Like that little 7-year old girl, activism starts with an inspiration, a little luck, and timing. I already had a coffee can. I saw the telethon. The rest was easy.

But many people today are nervous. The fear of “cancel culture” has paralyzed many good, mostly white, progressive, and well-intentioned people from speaking out, doing the wrong thing, or appearing tone-deaf.

Last week, on Blackout Tuesday, the social media protest against police brutality and racism, I posted (along with X million others) a black square on Instagram. Right after, I posted this on Twitter:

Immediately, a friend texted to thank me. “Confusing,” it seemed, was an understatement. This moment is a national reckoning where everyone is expected to weigh in, and not everyone knows how — or if–they should.

But in this era, it’s unacceptable to be neutral — to cry “Black Lives Matter” is not political or partisan. Erupting in the midst of a pandemic, when the price of racial injustice is literally life and death, the stakes are at an all-time high. It’s not enough to “not be a racist.” You are either anti-racist, or you are a racist. The activist values of Gen Z, accelerated into the mainstream by COVID-19, are blitzkrieging culture right now. Silence is no longer an option.

So how do you participate in such a complicated, nuanced and personal conversation? How do you raise your voice in a world where cancel culture seems to be the last word? What should–and shouldn’t– you say?

Activism is a ladder.

Think of your involvement as a ladder you can climb one rung at a time. Don’t feel like you have to start at the top. Just take the first step: recognizing that if you are successful, you have likely benefited from a system that has greatly disadvantaged others.

Then, decide what level of engagement fits your values, bandwidth and time. Here are rungs of the ladder, from the top down:

An Activist is on the front lines: most engaged, actively involved in forcing change, holding power accountable, setting the agenda and leading the charge. Typically, these are courageous, relentless, committed people who dedicate all or most of their lives’ work to their vision of moving society forward.

An Advocate publicly supports the work of activists — donating, amplifying, lobbying, and driving the message to the broader world. An advocate is either an insider or an outsider who solicits others to join the cause, devoted to raising awareness or funding while engaging hearts and minds.

An Ally is typically an outsider who elevates the efforts of advocates and activists. They’re willing to educate themselves and share their support in social media and their social circles. Allyship became an important factor in the landmark Supreme Court ruling guaranteeing the right for same-sex couples to marry. The support of straight family and friends has been credited with helping drive LGBTQ+ efforts to pass the monumental legislation in 2015.

Recently, allyship has been criticized for its low-stakes engagement. Here’s where the idea gets controversial and murky.

The accessibility and convenience of social media have contributed to the unfortunate exploitation of the well-meaning allyship. “Performative allyship” (or “performative wokeness”)– that is, seemingly-supportive posts serve to increase a person’s social capital, rather than demonstrate a commitment to a cause –is now loudly called out as insincere, opportunistic, lazy and self-serving. It’s also referred to as “#slacktivism,” or surface-level activism.

In addition to courting controversy for what some saw as attempts to silence Black voices, Blackout Tuesday exposed the hypocrisy of many influencers, celebrities and everyday people. A quick scan of Instagram profiles revealed posters with a well-established timeline of privilege (a parade of bikini selfies in gorgeous settings), leading up to a post of the black square of solidarity on June 2nd. But the very next day, their posts climbed back into their aesthetically perfect bubbles. Box, checked.

Despite the hollowness of those efforts, I believe the rise of #Slacktivism has put cultural pressure on people like myself to do better. It has served to hold people accountable to a higher level of engagement. I’ve heard so many smart, progressive (mostly white) friends who also posted the black square say: “I’m a good person–how do I show that?”

Think of your social media as the beginning of a conversation.

Platforms like Instagram and Twitter should be the outward expression of everything you stand for and believe, and an invitation for others to discuss and share those sentiments. So, when you post about a cause you believe in, what is it doing to further progress, and what does it say about you? What are your values, what does your brand have permission to talk about? How do you embody, educate and engage others in those values?

In order to understand this, start by conducting an internal audit of your own cultural ecosystem. Consider these five steps:

What has been your history with race, racism, and engaging with people unlike yourself? What was your earliest experience with “others” and what were you taught about them? What has been legacied from your upbringing, and what have you rejected? Why do you do what you do?

Take a look at the people you work for, with, and/or lead. When things get in a crunch, most people turn to what they know. How diverse is that pool of people and thinking?

In your leisure time, what perspectives are you surrounding yourself with? Who’s sending you links, jokes, and shaping your world view? Do you mostly stay within your own bubble, or do you regularly find ways to expand, grow, or challenge your own thinking?

Whose businesses are you helping to build as they help to build yours? How diverse are the partners in your business network? Whose success can you share?

How do you want to show up?

Before you speak out, take the time to educate yourself (and don’t ask your Black colleagues to do the work. That’s what Google is for.)

And learn to be an active listener: truly hearing others’ perspectives, in order to understand and cultivate empathy–not to calculate your next point of defense. Today, the most culturally successful people and brands are willing to take a risk or make a sacrifice, through an act of generosity, accompanied by a high degree of humility.

Showing up in this era requires an understanding of centuries of deep emotional pain whose legacy stings to this day. You need to recognize and own your missteps (and trust me, we all have them). And then acknowledge the concrete action you’re taking. Action can be sharing resources, marching in a protest, hosting a fundraiser, or spreading the word. Action takes time, effort, elbow grease and sometimes money. It is selfless.

If you have a platform, you can model the behavior. Ask yourself: in the future, how do you want to remember your part in this revolution? What would you want to tell your kids or grandkid you’re proudest of doing? You’re likely not going to want to say that you just posted a black square on one day because everybody else did.

I like to pose the hardest–but best–question to people looking to get involved: if there were no social platforms to showcase your efforts, how would you engage right now?

It’s easy to start. Just find your coffee can.