Can brands trademark a moving image, or a sound?

British IP Day 2019 took place on 26 June. The annual celebration of the contribution made by intellectual property to the UK economy and culture was marked by the exciting news that the UK’s first multimedia ‘motion’ trade mark had obtained registration.

The trade mark in question was filed on behalf of the Japanese multinational conglomerate, Toshiba. The clip depicts the refreshed Toshiba sign amongst a background of folding and unfolding coloured triangles reminiscent of the folding motions practiced in the classic Japanese art form of origami. The mark is an imaginative representation of the fusion between history and tradition, and future innovation in the digital age.

Whilst there are a number of jurisdictions around the world that recognise motion marks, protection is typically obtained by filing a series of static images that cumulatively depict a moving image. The technological limitations can potentially create some ambiguity as to the scope of the rights conferred by registration. The UKIPO implemented some changes to its trade mark practice earlier this year. As a result, the UK is one of the very few jurisdictions around the world where it is possible to obtain protection for a multimedia mark.

The UK has long been one of the leaders in IP protection. The Merchandise Marks Act 1862 was the first Act of Parliament to make forging a trade mark an offence. The Trade Marks Act 1875 created the first formal trade mark registration system in the UK and defined a registrable trade mark as “a device, or mark, or name of an individual or firm printed in some particular and distinctive manner; or a written signature or copy of a written signature of an individual or firm; or a distinctive label or ticket”. The Bass & Co. Pale Ale triangle logo made history when it became the first UK Trade Mark Registration on 1 January 1876. The registration is still in force today, 143 years on.

The UK has made a number of changes to its trade mark laws over the years, many as a result of its Membership of the European Union. The harmonisation of EU and UK laws has made it possible to protect non-traditional aspects of a brand such as colours, shapes, smells, holograms and sounds.

We can see that moving images are becoming an increasing prevalent aspect of digital marketing and it is important that trade mark law evolves to recognise and protect innovative approaches to branding.

The registration of the UK’s first multimedia mark is testament to the UK’s progressive attitude to IP and we are extremely proud to be part of it. We hope that this positive development will encourage brand owners to think differently when it comes to brand protection. 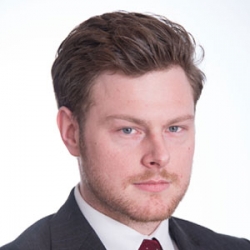