What kind of future would we rather design? A world drowning in stuff, or systems that make a difference?

We’ve spent a good part of the last two decades celebrating the “disruptors.” Think of the Ubers, WeWorks, Facebooks, and Amazons – the type of disruptive thinking that gave birth to these billion-dollar behemoths is regularly taught in design schools and B-school classrooms. Think outside the box! Bigger is better! If you can’t measure it, it doesn’t count! Do what nobody else is doing!

But today, the people who designed and built these systems are watching them slowly unravel, and we find ourselves in a crisis of trust.

When $47 billion unicorn WeWork almost turned to pixie dust after a disastrous IPO, thousands of employees were laid off so that the company could stay afloat.

Uber and Lyft are finally admitting that their ride-hailing services, supposedly designed to reduce car ownership and ease traffic, have worsened pollution and congestion in cities while also nearly putting New York City’s yellow cab drivers out of business.

Facebook, a website that a 20-year-old built out of his dorm room to rate women’s bodies, today has 2.5 billion monthly active users. That’s a third of the planet! A platform so big it’s fit to be a sovereign state, Facebook was responsible for spreading misinformation on a scale that influenced the country’s most crucial election and undermined democracy itself.

After wowing and wooing us for over a decade, these disruptive tech companies are faltering. Their products are still popular – Americans in 2020 trust Amazon and Google more than the police or the government – but we’re increasingly wary of how we use them. The Verge’s second national Tech Trust Survey revealed that while 71% of Americans still hold a favorable opinion of Facebook, less than 41% are willing to trust it with their information.

Confronted with big tech’s far-reaching influence on every aspect of waking life, users are realizing that “innovation” doesn’t always mean better and “disruption” isn’t always useful. People are losing their trust not only in the brands responsible for creating systems rampant with bias and manipulation but also in the way they have been developed, designed and marketed to them.

If you count any of these influential brands amongst your clients, you are part of the problem. The plain fact is, the creative industry is complicit in eroding the consumer trust that we so easily dismiss as the handiwork of big disruptors. Well, guess who put those brands out there? People like you and me. As long as we’ve played a hand in how these brands show up in the world – graphic, interactive, product, storytelling or otherwise – we are responsible.

Is design rotting on the inside?

As brand-builders, designers and creatives, we cannot abdicate our responsibility for cultivating trust in the brands we work with. A designer’s decisions have ramifications.

Victoria’s Secret, long known for parading exclusively tall, skinny, angel-winged, bedazzled models on the runways, was forced to cancel its annual Fashion Show last year due to poor attendance. Here’s an influential brand that fell out of step with culture not only because it didn’t evolve marketing strategy. Parent company L Brands shirked responsibility, never owning up to the damaging impact a lingerie brand can have on the way girls and young women view their bodies. American Eagle’s popularity, on the other hand, has soared in recent years because its lingerie brand Aerie made diversity its core message. Throughout its stores and marketing campaigns, Aerie highlights young people of different races, body sizes, and gender identities and even refuses to retouch images of their models – an effort to make them more relatable and promote body positivity.

Because of the powerful tools we have on hand – photography, type, packaging, advertising, messaging, tone of voice, positioning – it’s the creator’s responsibility to shape not only how the brand is perceived but what people choose to believe and buy into.

In this new age of distrust, no business or organization can be divorced from what it represents. Every brand is a social impact brand. As long as your brand interacts with people, it has an impact. And it matters what kind of impact it’s making.

If there’s one thing most professionals in the design, branding, advertising and marketing spheres can agree on, it’s that brands must embrace their new role of “moving at the speed of culture.” It makes me think of Superman clinging to the side of a missile – brands at the mercy of fast-moving, all-powerful Culture, reacting to anything and everything in real-time because they’re just along for the ride. But is that all we are? Superstars who swoop in to make things sound smart and look good? Who are we catching up with? What are we reacting to and acting on? Whose goals are we accomplishing? It’s our responsibility not only to move with culture but to shape where it’s heading.

Some of the best creatives I know have found a canvas beyond screens and products. They’re seldom seen but always there, rethinking public spaces and infrastructure, making policies, organizing communities, influencing culture and participating in social movements. Just like educators, advocates, and activists, designers are recognizing that they can’t solve real-world problems on their own and partnering with communities to drive lasting change.

I can’t be the only one disillusioned by design’s outsized impact on the way we live, work, play and communicate with each other. In an age of distrust, how do we empower brand builders and managers to think bigger, advocate for their profession and create a model that embraces responsible design?

Designers could take a tip or two from the tech world’s rising employee activism over the past year. With Google and Oracle employees walking out and Kickstarter becoming one of the first tech companies to unionize, the voices of big tech workers are finally being heard.

The creative industry needs its own call to arms to give power back to the user; to demand that responsible design not just happen in glossy ad campaigns but on a large-scale organizational level in order to change the way power is distributed, maintained and questioned. Our clients deserve better.

Wally Olins, one of the grandfathers of branding, always talked about trust – how brands earn it, guarantee it and deliver on it.

Decades later, as we carry his legacy into an era where people know that brands don’t have their best interests at heart, we need a different kind of revolution to mend that broken trust. Design can lead the way.

So, centuries down the line, if we’re not neck-deep in rebranded logos and plastic waste in the oceans, we need to ask: is the design and branding industry helping or hindering the global issues we grapple with today? 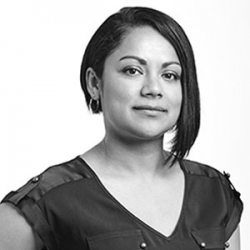 Jessie McGuire
Managing Director at ThoughtMatter
Jessie McGuire is the Managing Director of ThoughtMatter. We believe in using our skills to elevate issues that we deeply care about by helping businesses and institutions learn from and engage with the people they serve in more meaningful ways. We envision a world in which brands with purpose are the ones that matter the most. #WorkWorthDoing