By Sarah Ann Walters, Director of Strategy and Client Engagement at GROW

Digital innovation is seen as a swiss army knife of audience engagement, but too often these briefs are set up to fail because they’re missing a critical distinction: what kind of behavior are you trying to create?

The digital environment offers so much potential for marketers that it’s easy to think of digital as the silver bullet—a catchall solution that can at once cut through the noise, create a novel experience, capture massive reach, drive widespread adoption, and make a meaningful impact on your audience.

But we all know that when we expect something to do it all, it almost never does anything well. The whole thing falls flat, and often runs the risk of full-on failure. (Or at the least, a complete miss on your KPIs.) So, how can you avoid falling into this trap? It starts with getting clear on the problem you’re trying to solve.

Do You Want to Create Disruption or Mass Adoption?

At first blush, it may not sound very problematic to expect a single digital campaign to achieve both disruption and mass adoption. After all, isn’t digital the golden ticket to innovation at scale? It can be. But the truth is that these two distinct goals stand at opposite ends of the digital marketing spectrum.

The Diffusion of Innovation Theory (you know: innovators, early adopters, and so on), reminds us why new behaviors and widespread engagement don’t happen all at once.

In the context of digital innovation, “disruption” is about creating net new consumer behaviors, which are often tied to emerging tech. There’s an inherent barrier when a brand asks people to try something new that goes against the grain of mass adoption. Trial requires risk and, consequently, immediately narrows your reach to those early adopters. But the scale can be achieved by creating something so novel that it gets talked about by influencers.

On the flipside, mass adoption is earned by leveraging native behaviors and existing technologies. The innovation opportunity comes from creating novel experiences within widely used tech. Scale can be achieved by virtue of accessibility: leaning into what consumers are already opting into in their digital lives quickly gets engagement from the majority.

Each approach is valuable. Each has a place in creating powerful brand engagement. But when you conflate the two, you inevitably wind up with unfocused strategies and creative solutions that don’t deliver. Understanding this critical distinction is key to unlocking the right strategies and ideas to engage your audience.

Disruption versus Mass Adoption: Which is Right for Your Digital Campaign?

So how do you know whether your digital innovation brief should be calling for disruption or mass adoption? Let’s break down the defining traits and outcomes of each type of campaign to understand which approach is right for your brand’s needs. 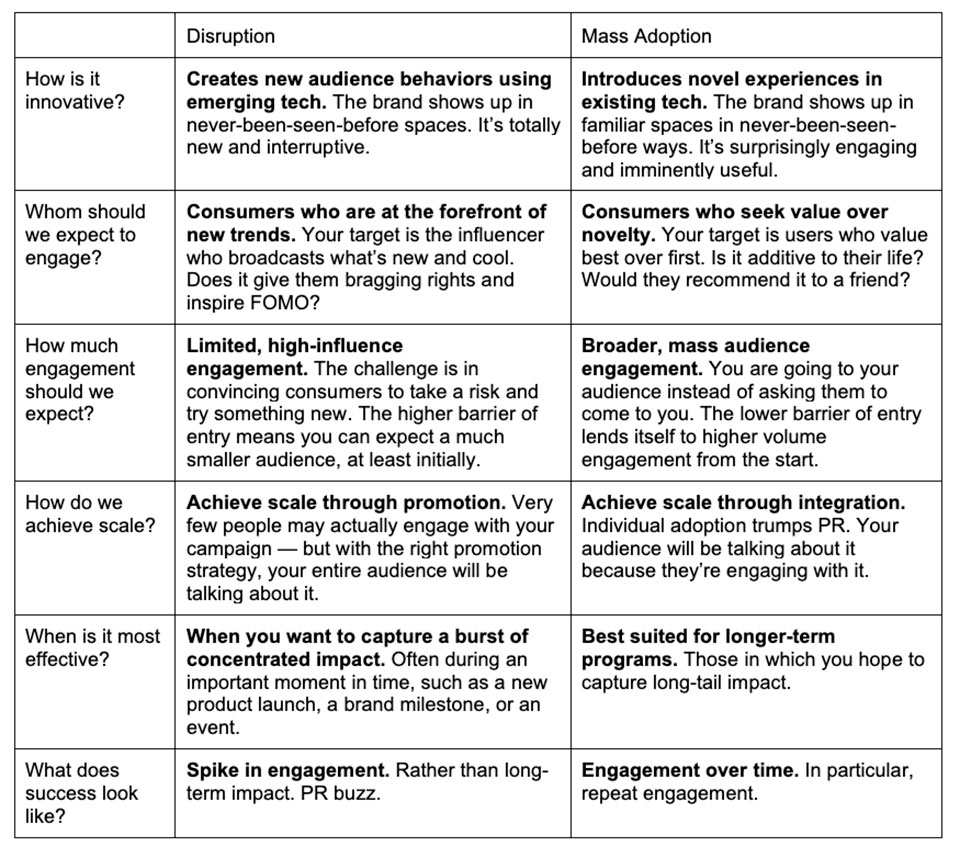 Does Your Brand Have the Equity to Engage or Disrupt?

Ultimately, successful digital experiences in either of these realms depend on the relationship your brand has with your target audience. To ask something of your consumer—whether that’s trying something new or returning to engage again—you must have credibility in that space. Ask yourself:

The next time you build a brief for an innovative digital campaign, challenge yourself to consider what you’re really asking for. Go beyond simply asking for it to do everything, and define whether you want to create the kind of disruption that fuels buzz because of its novelty or the kind of experience that drives widespread engagement because of its clever usefulness. Is it about getting everyone to talk about it? Or is it about getting everyone to do it?

This clarity from the outset will lead you to purposeful, consumer-first digital ideas that are truly innovative, rather than digital experiences that are just tech for tech’s sake.