I still remember the moment.

I was walking into a branch of Barclays, my bank, in the vain search for a member of staff who could actually help me. And on the window, just as I crossed the threshold, it said:

Through these doors walk the loveliest people in London Bridge*.

*And you’re one of them.

I had the reaction that any normal person would have: I was a little bit sick in my mouth. Cringe, I believe the kids say. This was a few years ago, and thankfully Barclays have got a grip in the meantime.

It’s writing like this that gives tone of voice a bad name. But its faux cheery, winky tone isn’t inherently evil. It’s just so obviously fake when it’s coming from a bank like Barclays. It’s branding at its most superficial: slap something on a window and hope the dumb punters swallow it. Well, we’re not daft.

Innocent Drinks are often fingered for starting this craze. There’s even a word for the FMCG version of the cheeky-chappy tone of voice: ‘wackaging’. And as the number of apps on our phones explodes, any number of UX writers are aping the same chirpy inanity. No wonder the Matey-ness Backlash has had a second wind. I keep reading columns mithering about how ‘I don’t want my loo cleaner to try to be my best friend.’

Well, fair enough. But the Innocent voice isn’t the only option (and by the way, most of us cynical branding types have forgotten just how much fun it was when we first saw it). And at the other end of the spectrum, most brands still sound depressingly cold and corporate once you get past the shiny ad copy and into the nooks and crannies of their sales emails and job descriptions.

So the instinct to ‘warm up’ most brands is right. The question is how. Look at Monzo’s tone of voice guidelines. People bang on about them being a challenger bank, but their language isn’t challenging at all: at its best it just gets out of the way. You don’t notice it because it’s so nice and natural. (Full disclosure: Harry Ashbridge, who wrote these guidelines, used to be part of my team and I taught him EVERY SINGLE THING he knows.)

Here’s the obligatory bit about neuroscience. More everyday language (usually meaning language that’s closer to how we speak than how we traditionally write) is easier to process. In turn, that means we’re more likely to remember it, and more likely to trust it. (In fact there’s research that shows the simpler your language, the more intelligent people think you are.)

And here’s the obligatory bit about data. Simpler language works. When we rewrite things for brands, we’ve seen sales go up, complaints go down, and people more likely to do whatever it is you want. Note that this is about what they actually do, not what they say: sometimes in focus groups, fuelled by cheap white wine and Twiglets, people say ‘I want my bank to sound professional.’ But when you put it to the test, in the real world, the less formal, more human version nearly always performs better.

Just make sure you pick the one that really suits your brand before you stick it in your bloody window. 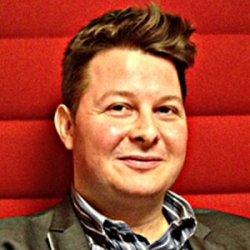 Founder at Schwa
Neil Taylor is the founder of tone of voice and behavioural science consultancy Schwa and the author of Brilliant Business Writing. They’ve defined the tone of voice of brands like Sky, Eve and Iwoca. And his tombstone will say: ‘He named Ocado.’