2020 in America felt, to many, like a stream of ever-worsening catastrophes.

In a single year, the nation faced the deadliest health crisis since the Spanish Flu, the biggest single-day stock market crash in decades, and the largest protests since the civil rights era.

Throughout all of these events, the impact on the daily lives of Americans was profound. The compounding crises altered how we work, how we learn, how we entertain ourselves and even how we think about social issues.

Over the course of the year, GWI USA data has reflected many of these fundamental changes in American life, some more obvious than others.

The overall picture is a year that is unparalleled in the history of the country, the effects of which will surely shape the next decade.

In early March, the pandemic triggered mass hysteria across the country.

As the year progressed, with no end to the pandemic in sight, Americans quickly became comfortable living in relative normalcy, and by the summer, much of middle America had returned to business as usual.

Since its peak in the spring, our fear of COVID-19 has fallen, yet the disruption it caused, especially in the school, work, and social lives of younger Americans has left a lasting effect on their mental health. 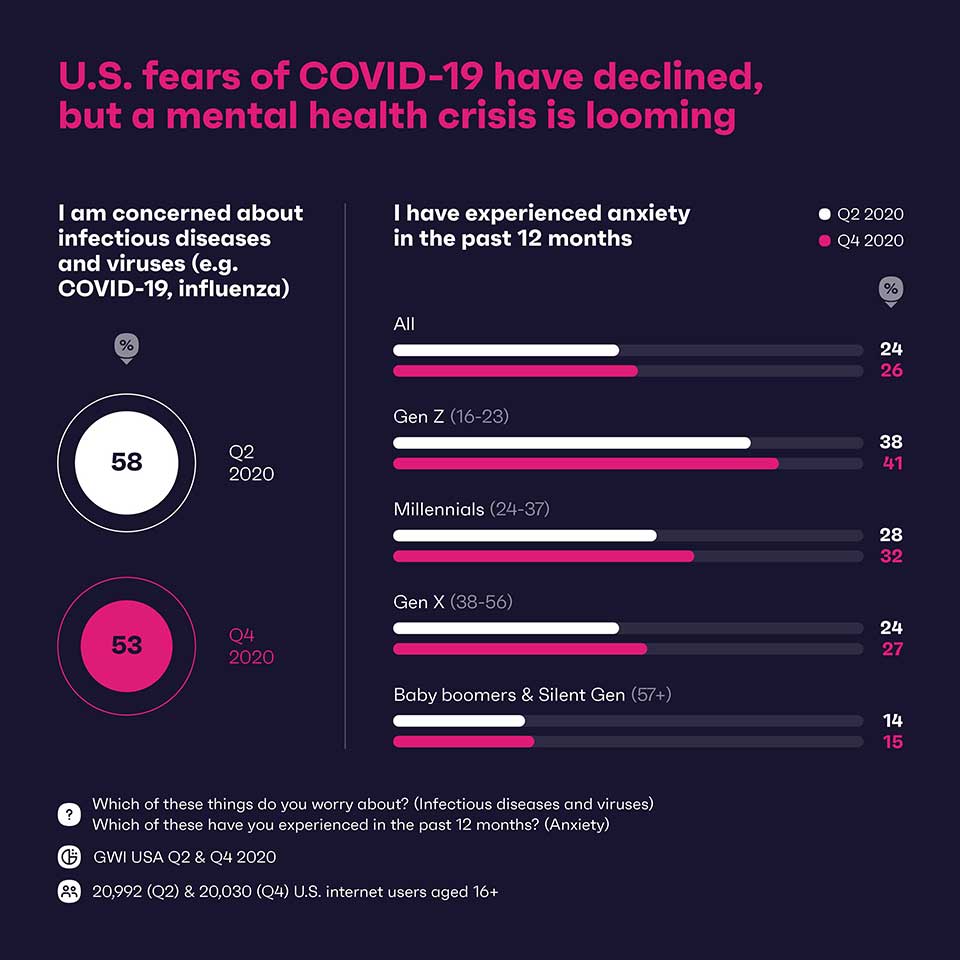 Throughout the year, feelings of anxiety have grown, especially among Gen Zs and millennials, and these increases are in line with similar increases in levels of stress and depression.

This age group, who have likely spent a good deal of their school year attending classes from their bedrooms, also saw an uptick in incidences of depression. The percentage of Gen Zs who are currently experiencing depression rose from 11% in Q2 to 13% in Q4.

While each of these mental health issues is more pronounced in younger generations, they’re in no way unique to high school and college students.

2020 caused anxiety to increase in each generation and stress to increase in every age group except baby boomers. This is no doubt due to the fact millennials and Gen Xs experienced yet another once-in-a-generation economic collapse.

GWI USA data also suggests that many of those experiencing mental health issues may be attempting to self-medicate instead of seeking real help.

Also, the portion of Americans with stress or anxiety who consume alcohol in their home “regularly” or “often” grew from 26% to 29%, and their drinking outside of the home increased from 16% to 19%.

But there is a silver lining.

Over the course of the year, Americans became more open to confronting this growing mental health crisis.

By the end of the year, one half of all Americans said we should be more open about mental health, and 62% said it’s OK for people to say when they’re struggling. So, while the situation may be more precarious than ever, 2021 may be the year that turns the tide.

Americans are getting comfortable in their own homes

Since the start of the pandemic, the focus for many Americans has shifted entirely to home life.

And it’s no secret to anyone paying attention that the companies who succeeded in 2020 were those that helped improve our in-home experiences. Netflix, Amazon and Disney+ brought the movie theater to our living rooms; Peloton, Fitbit, and other workout apps brought the gym to American bedrooms; and countless food delivery services brought restaurant-quality food to our dining rooms.

Americans stuck at home took advantage of many ways to keep busy, but also spent a good deal of money retrofitting their homes to more comfortably enjoy these remote activities.

Many invested in better, smarter hardware for entertainment, home-health, or overall comfort. The smart home movement, which has been steadily growing for the past few years, experienced huge growth as a direct result of the pandemic.

Purchases of high-tech products grew, and though the sales of smart products, like smart thermostats, smart security systems and smart voice-activated speakers were more concentrated among high-income Americans, the sector experienced growth from all economic demographics.

On the other hand, low-income Americans drove the increase in entertainment-focused products, like streaming sticks, smart TVs, and games consoles.

Interestingly, older consumers were the ones making many of these tech purchases. Gen Xs and baby boomers took advantage of their increased time spent at home to purchase products that many had shied away from previously, like smart TVs, home voice speakers, and devices for TV streaming.

Although it’s well known that the streaming sector experienced huge growth throughout the year, it’s interesting that in many cases it’s these mature generations driving a lot of the increases in online audio and video streaming.

Baby boomers and Gen Xs have been increasingly joining younger generations in subscription streaming of video and audio, while simultaneously shying away from traditional media.

As if the pandemic wasn’t enough to fill the 2020 chapter in the history books, Black Lives Matter (BLM) protests across the country this summer were, by some measures, the largest demonstrations of any kind in the nation’s history.

These events occurred in every major U.S. city and were filled with protestors representing every race, religion and generation in the nation.

So it’s no surprise that support of issues like equality, diversity, inclusion, cultural representation and visibility has taken center stage in the national conversation, and in the minds of many Americans regardless of demographic. 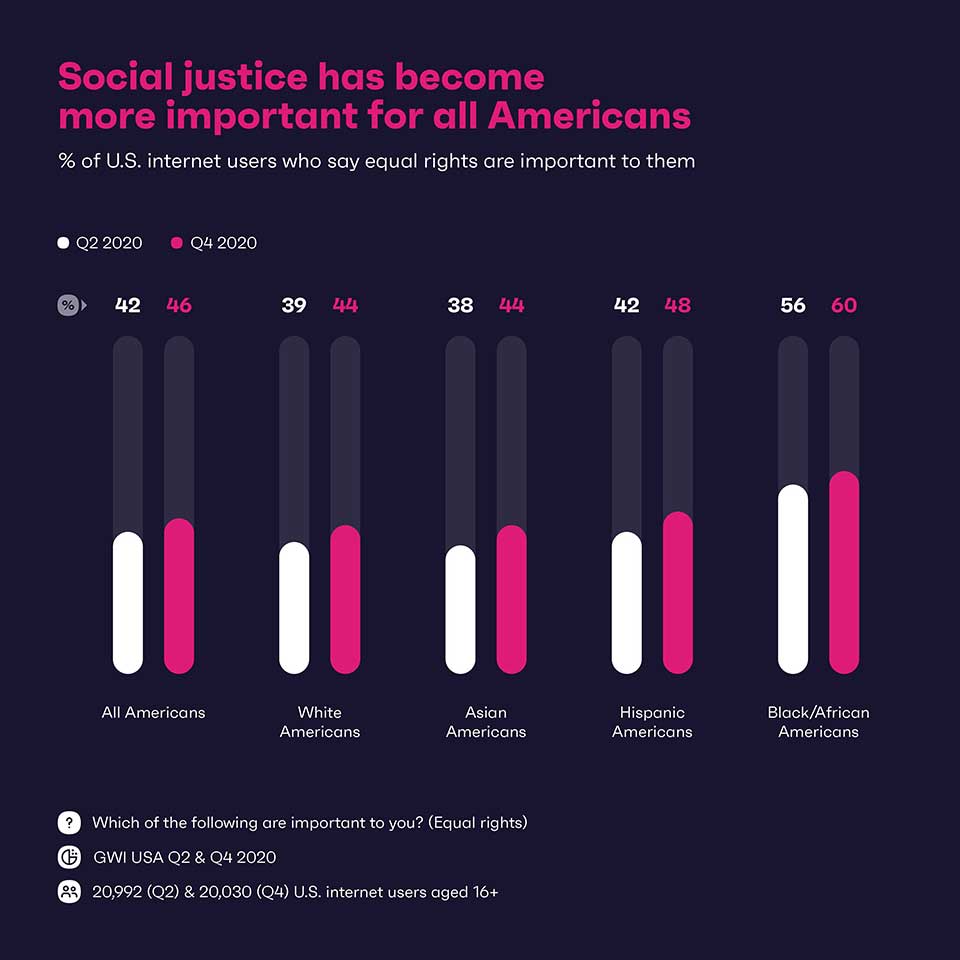 Across the country, the portion of Americans who said equal rights are important to them grew by nearly 10%.

And while the idea is still overwhelmingly more important to Black Americans, the growth in 2020 was highest among Asian Americans, Hispanics, and White Americans.

Since the start of the protests, equal rights have become more important to each group of Americans regardless of their generation, income bracket, political ideology, a region of the country, or urban context.

While there are still many Americans who remain neutral on the promotion of equal rights, the trend of all Americans is toward growing support.

Perhaps the most impressive aspect of the BLM protests is their success at cultivating real, actionable changes from the institutions they were protesting against.

Diversity and inclusion initiatives are a tangible way to improve racial inequalities within organizations. If the upper echelons of American businesses are going to reflect the racial and ethnic distribution of the American population, then they need to actively work to include People of Color in every level of their operations.

This suggests that the BLM movement has been successful in raising the quality of the national dialogue around race, and the many different changes that American businesses have undertaken since this past summer are a testament to the size and power of those demonstrations.

An ever-growing list of businesses and government institutions have since responded with their own unique initiatives. From million-dollar donations for diversity programs to increased transparency about racial equity in their hiring practices, the change has begun.

Part of this pressure put on businesses has been from customers and employees themselves. Businesses and marketers have spent the year attempting to understand the changing needs of their customers in a pandemic, and certain topics have become central to those needs.

Over one-third of the American public is now concerned about police brutality, and over 4 in 10 now worry about racial relations and racism.

Companies are taking cues from their consumers on how to act. In their advertising and their actions, corporations want to reflect their customers’ values and support the same causes. Recent examples from Coca-Cola, Pepsi and Budweiser bowing out of Super Bowl ads proves that above all 2020 has made advertisers wary of appearing tone-deaf.

What are the implications for 2021?

In a tough year for the country, filled with more changes than this piece could ever possibly speak to in its entirety, there have been both positive and negative impacts.

At the end of it all though, the future does look bright for these United States.

The health crisis brought on by the virus revealed much larger mental health issues which are more readily being confronted by citizens all over the nation.

The focus on home life caused strain for businesses but opened the door for more rapid tech adoption by older generations.

And lastly, protests against police brutality and racial injustice were met with overwhelming support for diversity and inclusion among all Americans, not just those who were in the streets this summer.