Advertising has polluted cities, annoyed consumers and jeopardized its own existence. Beyond a mass-media cacophony, brand communications’ significant carbon footprint and runaway consumption are certainly contributing to what economists labelled as market failure. In the UK, for instance, advertising is responsible for two million tonnes of carbon dioxide emissions annually, equivalent to heating 50% of London’s social housing, according to CarbonTrack.

In this sense, should messages such as the City of Melbourne campaign inviting people to cycle more even be allowed? On the one hand it is better to communicate a solution to the issue (i.e. cycling) than not. On the other, if the communication contributes to the problem more than the solution, then what’s the point of it?! 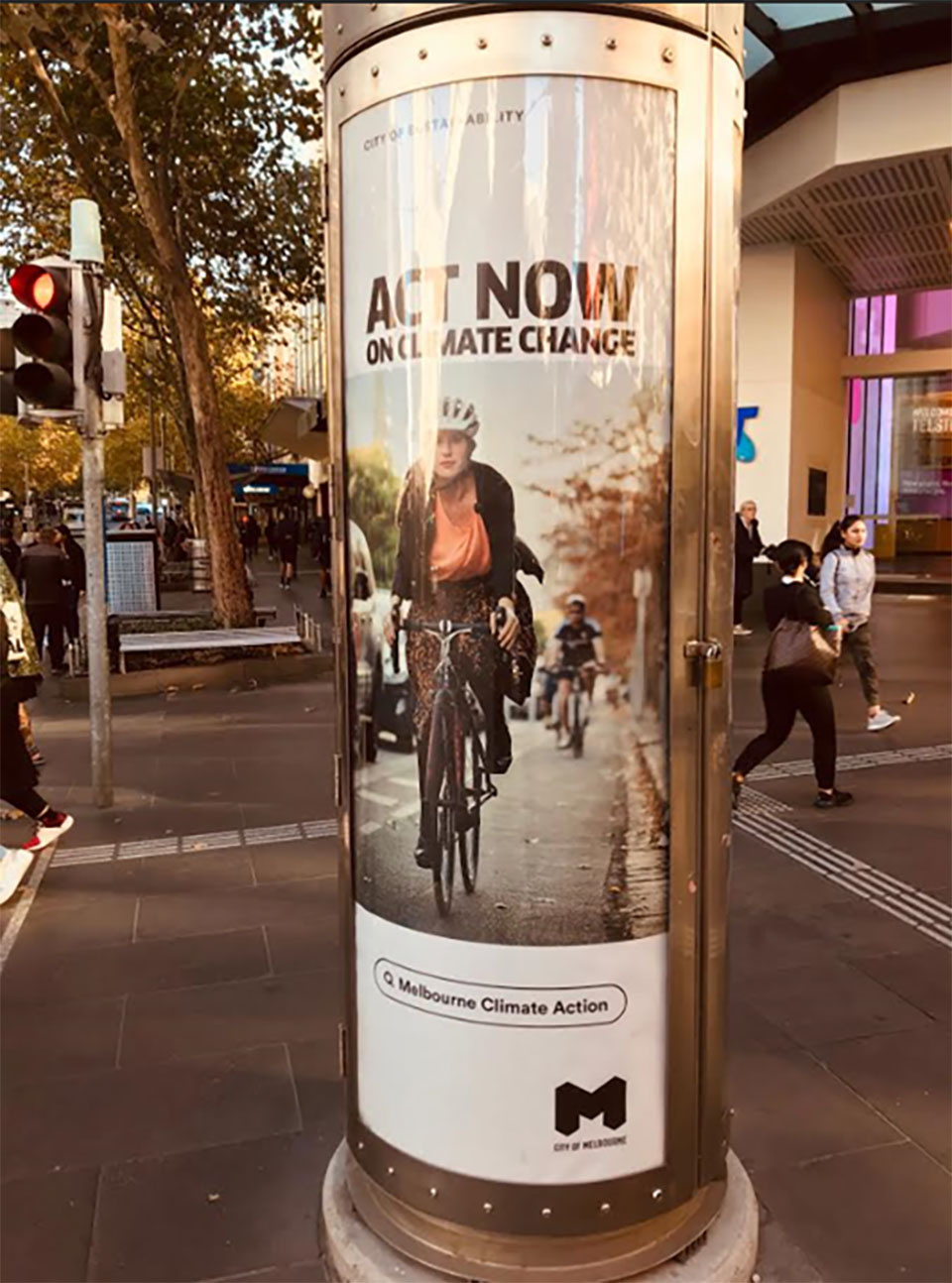 Still, contrary to Jerry Seinfeld’s 2014 infamous line at the Clio awards calling out the advertising sector to its face “I think spending your life trying to dupe innocent people out of hard-won earnings to buy useless, low-quality, misrepresented items and services is an excellent use of your energy”, marketers and their brands can [and should] move away from being part of the problem to becoming part of the solution for sustainable development and the industry’s own sustainability.

The urbanisation megatrend wholly underpins other forces shaping the way we live, now and in the future, as indicated by the UN, the World Bank and CSIRO, to name a few. Although cities only occupy 2% of Earth’s landmass that is where 75% of consumption and an even higher percentage of brand communications concentrate. Because of increased demand for ever more comfortable lifestyles, the existing urban infrastructures have been feeling their “growing pains” for decades now.

From energy to education, health, waste-management or safety, cities’ services are struggling to keep up with their larger, older and “hungrier” populations. Therefore, the strategic opportunity is to reframe brand communications from the promotion of conspicuous consumption to becoming a regenerative force in the economy of cities. That means, using brands’ touch points as more than mere messengers, but rather delivering public utility services; I coined it Urban Brand-Utility (UBU).

For example, Domino’s Pizza looked beyond the traditional path-to-purchase to permeate people’s life-journeys. Through their paving for pizza initiative, potholes, cracks, and bumps – responsible for irreversible damage to people’s pizzas during the drive home – were fixed. 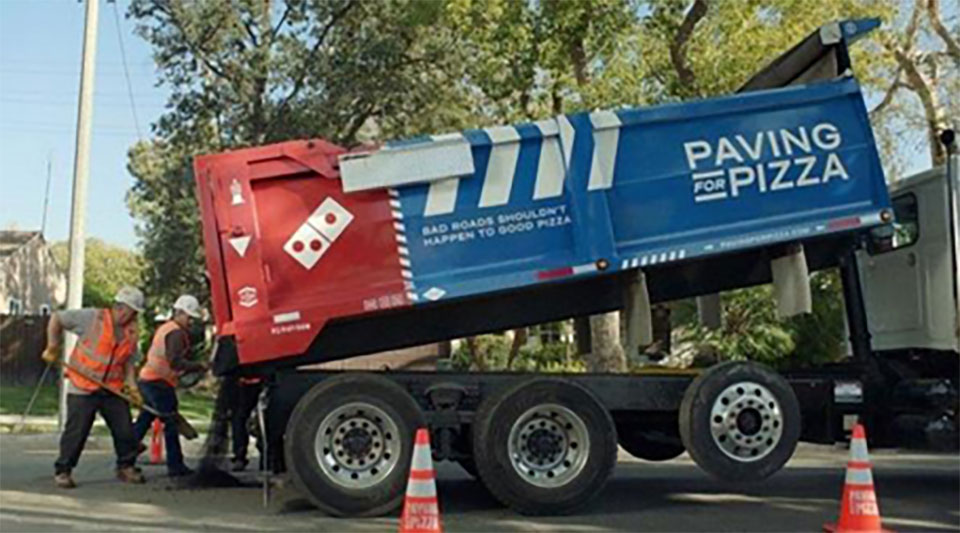 This may sound silly but according to the National Surface Transportation Policy and Revenue Study Commission of the U.S. Congress, the annual investment required by all levels of government to simply maintain the nation’s highways, roads, and bridges is now estimated to be $185 billion per year for the next 50 years. Today, the nation annually invests about $68 billion. 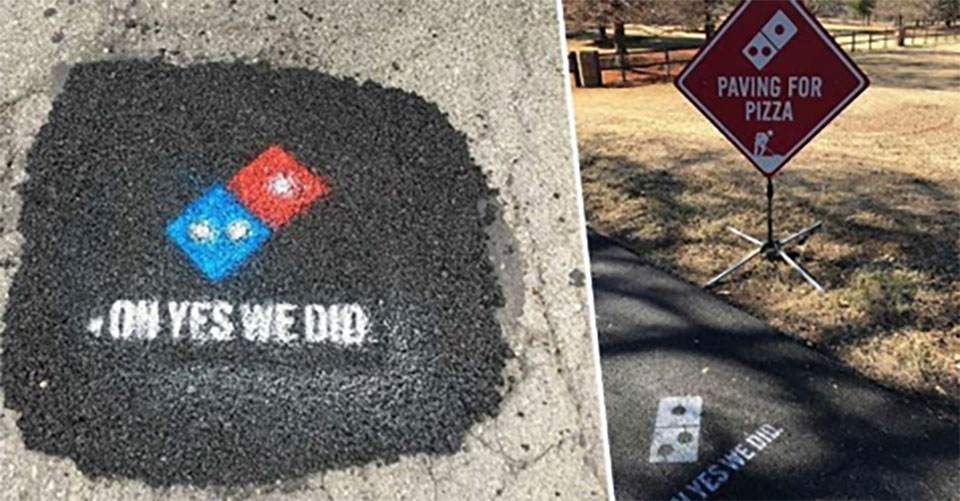 According to Bill Scherer, Mayor of Bartonville, TX: “This unique, innovative partnership allowed the Town of Bartonville to accomplish more potholes repairs.”  For the city manager of Milford, DE, Eric Norenberg: “We appreciated the extra Paving for Pizza funds to stretch our street repair budget as we addressed more potholes than usual.”

In other words, people had their needs addressed with neighbourhoods becoming more attractive. The city increases tax collection from the new businesses being set up, which also reduces the cost related from having to deal with derelict areas.

If we could see ourselves as Citizen-consumers, as opposed to individual shoppers in the market, every dollar spent would enable business to tackle the issues that matter most.

Towards a new revenue model underpinned by creative urban resilience

To do good, we must also do well. Advertising is the soul of the capitalist system and the best incentive to upgrading it is by creating new revenue streams. For one, a brand that shows itself relevant and useful is more likely to cut through the noise and increase sales. But there’s also a bigger commercial model to be explored. First, by definition, UBU programs have three core objectives:

Here’s a hypothetical situation. Let’s assume that Domino’s program generates a $10 million surplus to the city of Bartonville by minimising the costs from dealing with potholes. Rather than treating this as a one-off campaign, smart mayors would try and create a virtuous cycle, where 50% of the surplus is retained by the city, 25% is returned to the advertiser and 25% to the agency and media owner – a value only unlocked by repeating the approach.

This way, marketing budgets are effectively turned into investment funds with returns in the form of brand cut-through, happier customers, social impact and more effective city management, as shown on the model below. 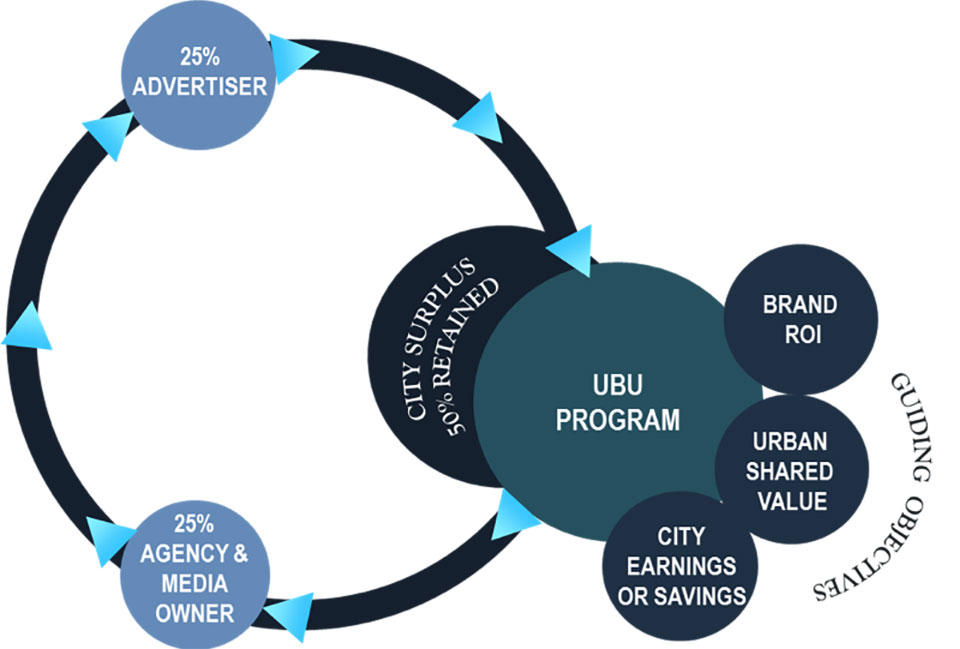 As with the idea of a circular economy where products and services go beyond an end user’s finite lifecycle, UBU looks at brand communications as closed loops by designing a system bigger than fixed campaign periods, target audiences and business-as-usual KPIs.

Brands with some level of foresight able to broaden their audiences from customers to citizens and their revenue model from sales to the creation of shared value will be the game-changers for profit and prosperity.

Markets, choice and competition are not just a consumer’s best friend, but their civic representation. After all, as one of the tribunes asks the crowd in Shakespeare’s Coriolanus: “What is the city but the people?”