I want to flip that on its head because, as we’ve all seen it thousands of times, confidence is an outcome of an action, not a prerequisite for it.

My daughter is nine years old. She doesn’t want to ask her teacher questions because she’s scared and thinks she needs more confidence first. Over and over again, I hold her hand and stand by her as she frames up the questions she wants to ask. She’ll say “Mommy, I’m scared.” and I’ll say “It’s ok to be scared. You can be scared while you ask.”

And she’ll go do it.

She’ll say, “but I feel embarrassed” and I’ll stop myself from saying “there’s nothing to be embarrassed about” and instead say “It’s ok to feel a little embarrassed, you can do it right alongside of that feeling.”

And she’ll go do it.

Over time, in every new asking challenge, she comes out the other side seeing that the act of making the ask dissolved the embarrassment or fear and quickly those feelings are replaced with a little more confidence than she had before. A little more power to go into the next frontier – a little more courage.

And she’s not alone. The professional women in my workshops don’t want to ask for more because they’re scared and think they need more confidence first. Up and down the professional spectrum women find themselves in the confidence trap. But you can break it and find a way to take action trusting that the courage you use to do it with will produce the confidence you want.

Love your goals more than you hate your fears

Let yourself be scared

The assumption that we can do something before we feel full of confidence breaks the confidence trap. Switch the expectation to unlock action.

I’m not talking about a “fake it ‘til you make it” mentality. Because even if you’re doing something without full confidence you are still DOING it. Not faking it. Instead, do it until you make it and give yourself credit along the way.

Acknowledge where you are now

When my daughter gets home from school after making a big ask or taking an action that felt big and scary, we ALWAYS stop to take stock of it — “what happened and how do you feel now?”

This is an important piece of seeing that the scary act of asking big didn’t crush you. You’re on the other side now and things look and feel different. Maybe you even feel like “I can’t believe I did it! I can’t believe I went ahead and asked! Omg, I can do anything!” Maybe you didn’t get exactly what you wanted. Maybe it took you longer to learn something than you expected, but you dove in. You did it. And now you have some confidence to build on. Acknowledging that is key to believing that taking action can produce confidence the next time you’re looking for some. That right there is what breaking the confidence trap is all about.

As mothers, we want our children to head out into the world to build skills, learn, try hard, experiment, grow and challenge the status quo in nearly every part of their lives. It is paramount that we teach them to navigate uncharted territory and face their fears about the imagined consequences of failing, of not being good enough and of taking risks. We can teach them to forge ahead, sourcing courage from the love of our goals and acceptance that being scared is natural and human. The confidence trap can’t grip us too tightly if we remember to look back and acknowledge how far we’ve come. We can reject the myth of “I’m not ready yet, not until I’m confident”. Instead, let’s accelerate the creation of confidence through a willingness to act without it, through our fears. 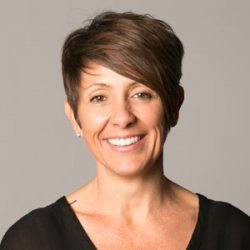 Founder at Ask Like An Auctioneer
For the last 20 years, Dia has coached world leaders, CEOs, innovators and ambitious professionals and led workshops at high profile corporations including Quartz, Twitter, and Nabisco. She helped Rio secure the 2016 Summer Olympics and has been on some impressive stages, including the 2018 3% Conference and Pandora’s Women in Technology Summit. Dia is a SheEO activator and partners with Latinas in Tech to connect, support and empower Latina women working in the industry. After checking auctioneering school off her bucket list, she translated the techniques she learned into a program that prepares women to ask for more and leave nothing on the table, called Ask Like an Auctioneer. Dia’s confidence is infectious and she has the ability to connect with women in a range of industries and positions – from ambitious graduates to senior management teams. She's been covered on CNBC Make It and Forbes.