71% of Americans think brands have a role in responding to the issue of police violence.

Less than a third (29%) said that it is not a brand’s place to respond to the issue. And yet, consumers are divided along a broad spectrum on how exactly they think brands should respond. Differences in opinion are mostly dictated by political leaning in this polarized environment, so there is no silver bullet for brands who, ultimately, must respond according to their moral judgment.

“An authentic brand response means nothing unless BIPOC are truly involved in the response. […] Otherwise it’s just advertising.”

Black or African American respondents were more likely to consider specific concrete actions (beyond releasing statements) essential to an ‘authentic’ brand response—They were almost twice as likely as the general population to consider participation in internship programs for at-risk youth a key element of an authentic brand response (18% vs. 10%), and more than twice as likely to consider donations to organizations facilitating voter registration essential (16% vs. 7%). Non-white Americans were over twice as likely as white Americans to want brands to prioritize releasing a statement specifically in support of the Black Lives Matter movement (19% vs. 9%).

We asked respondents to describe what an authentic brand response to the Black Lives Matter movement means to them. Here’s what some of our Black respondents had to say:

“It means that you […] will help to include black and other people of color in your executive boards where decisions are made and supporting their causes.”

“The brand […] gives their employees a platform towards their colleagues to express their opinions and let their voices be heard.”

“An authentic response must include actions.”

What are the 3 most important things a brand should be doing to address issues of police violence and racial injustice in an authentic way? 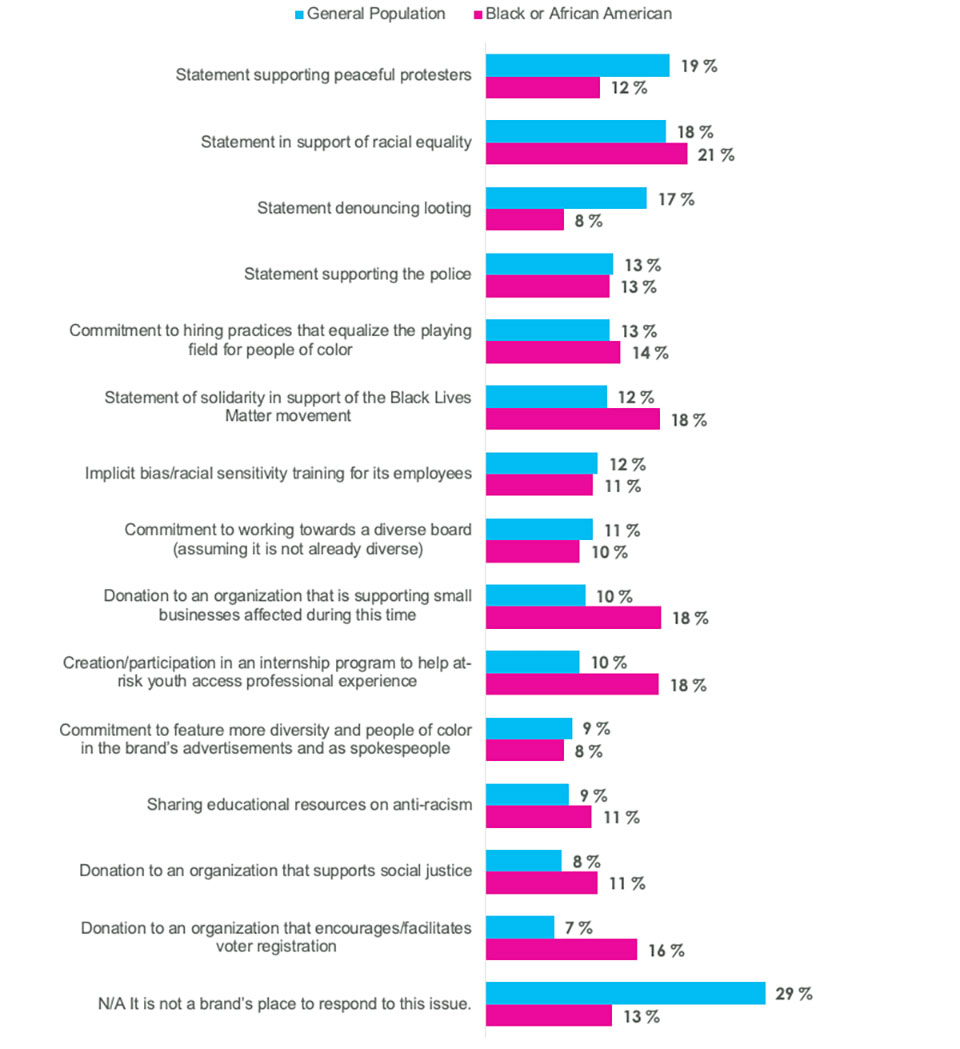 The worst offense in the eyes of consumers? Hypocrisy

How would you react to the following brand responses to the issue of police violence and racial injustice? 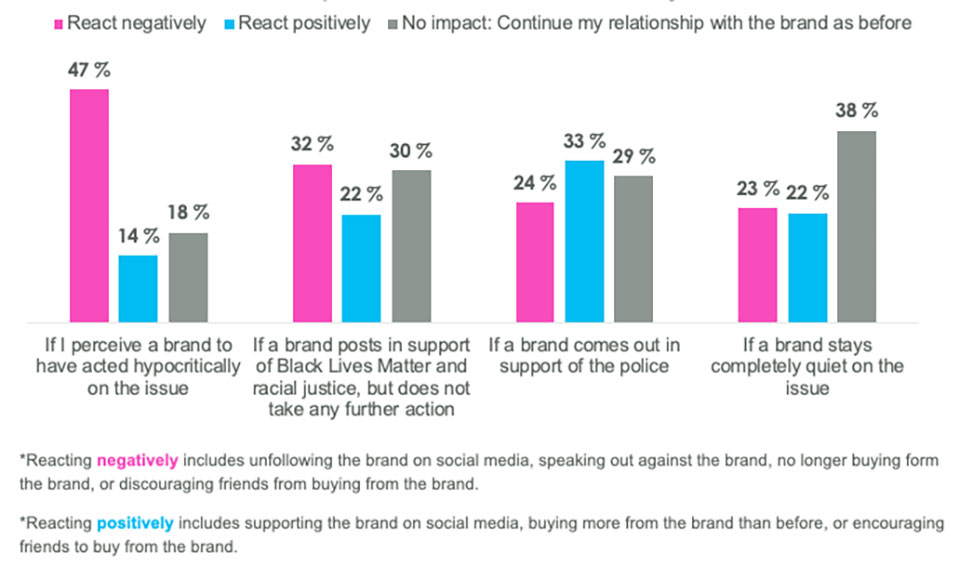 Does BLM belong in advertising?

3 in 5 Americans want brand advertising to respond to the recent protests for Black lives.

However, the remaining 2 in 5 prefer to see content that isn’t related to what is happening at all. Of those who want ads to address the racial justice movement, about twice as many want to see ads that merely reference what’s happening than ads that make it the central focus.

Younger Americans aged 18-34 and liberals are significantly more likely than average to want brands to reference the current racial justice movement in their ads. The same goes, predictably, for Black Americans and other people of color.

On average across sectors, more consumers want ads to reference or focus on the Covid-19 situation than the racial justice movement (68% vs. 62%).

To what extent do you want ads to respond to the recent protests and the Black Lives Matter movement? 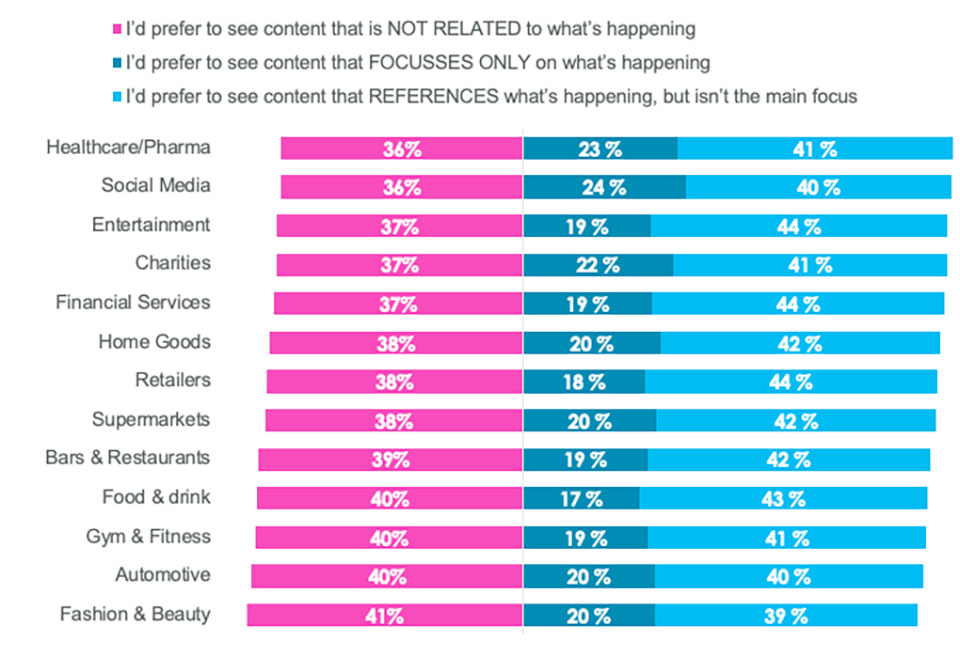 That’s compared to only 34% of the general population. This discrepancy is also true, by a similar margin, for other populations of color. Opinium will soon be releasing a Multicultural Voices report to help bridge this gap and bring to light the experiences of people of color in the United States.

If you’d like to know more about our research, get in touch: hello@opinium.com.

To be notified of upcoming research when it goes live, sign up here.

OPINIUM is an award winning strategic insight agency built on the belief that in a world of uncertainty and complexity, success depends on the ability to stay on pulse of what people think, feel and do. Creative and inquisitive, we are passionate about empowering our clients to make the decisions that matter. We work with organisations to define and overcome strategic challenges – helping them to get to grips with the world in which their brands operate. We use the right approach and methodology to deliver robust insights, strategic counsel and targeted recommendations that generate change and positive outcomes.