Brands have always had the resources to share their message and stories with audiences. But today, there are also countless streaming platforms spending billions to compete for attention. That means that brands now have endless options for content creation and distribution, from YouTube Premium, to Facebook Watch, to IGTV, and even Snap Originals. So why aren’t the creative approaches to these platforms equally limitless?

What bothers me the most is that, with all of these different options for digital storytelling, brands and content creators are still repurposing traditional episodic programming and advertising campaigns online, hoping to take the easiest path to engage audiences. But for a moment, forget about clicks and shares. Serious storytellers should approach these platforms and social media outlets as an opportunity to experiment with new ideas.

For example, in partnership with Facebook, my company, 1stAveMachine, promoted best-selling author James Patterson’s latest crime novel, The Chef, exclusively on Messenger. The result was a fully interactive brand experience on a seldom-tapped part of the Facebook platform. The titular chef posted content and messages in-character about his daily activities as a mystery slowly unfolded, creating a dialog with his audience of followers. Users were sent a continuous loop of video clips to scroll through and edit together. Those attentive to small details were rewarded with clues to solve the crime. 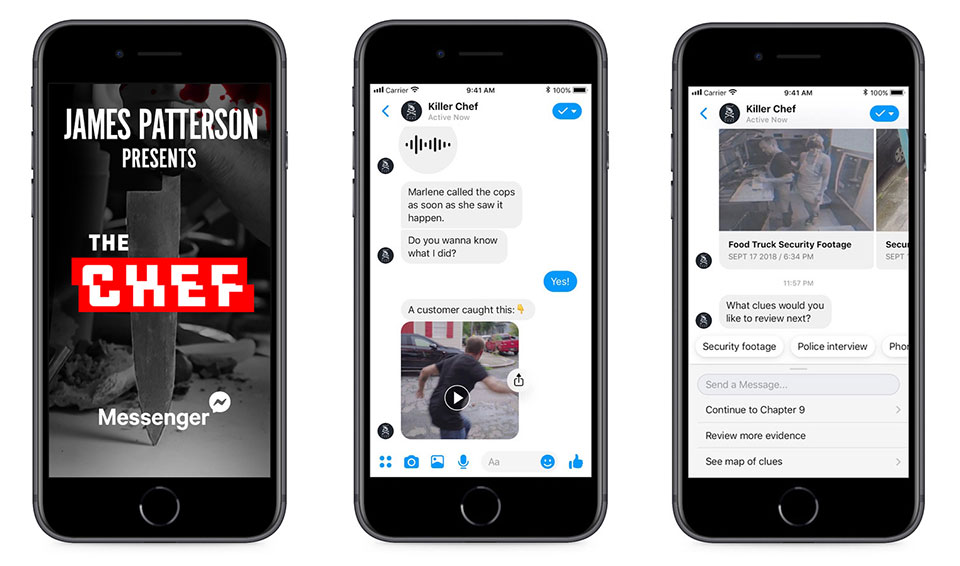 Projects like these can teach a lot about the value of experimentation, with lessons that can be applied to any campaign. Here are a few others that have taken risks and pushed the boundaries of their platforms.

Marilyn Manson – We Know Where You Fucking Live

This project is so creepy, but it’s absolutely brilliant digital marketing. To promote Marilyn Manson’s new album entitled “I Know Where You Fucking Live,” Loma Vista Recordings ran a campaign that proved just that to Manson fans. In exchange for a chance to win free Manson tickets, fans were asked to share their email addresses and locations. Those locations were then used to generate automatic videos from satellite imagery of the users’ homes, then emailed to fans to prove that Marilyn Manson knows where you fucking live!

The project is controversial—and my first instinct is that this is an example of experimentation gone too far—but it’s campaigns like this that get me excited because it proves how absolutely nuts the internet is and how much is possible. The I Know Where You Fucking Live campaign unapologetically underscored so many privacy issues we have surrounding the internet (I cover my webcam, do you?) and put them in peoples’ faces in a way that Marilyn Manson could be proud of. I have to respect the audacity.

LensCrafters – The Digital Eye Exam That Shows You More

To promote Clarifye’s digital eye exam, LensCrafters advertised on Facebook with a clever 360-degree video format. According to the campaign, one in four children have an undetected vision problem. To showcase this, the footage is shot from the first-person perspective of a young boy who cannot see beyond his own desk in school. After undergoing a medical consultation with Clarifye’s service, the boy gradually improves his eyesight and academics.

The integration of 360-degree video technology, a tough tool to use, was ambitious for its time and organically tied into Facebook’s 360 video capabilities. But, more importantly, it used the new format to leave an emotional impact. This shows that if brands can take the time to properly understand the full capabilities of their distribution platforms, position them at the forefront of their campaigns with impactful results.

VICE launched a profound commercial for “Like What You Hate,” an algorithm programmed to stop users from living in the echo chamber of their news feeds. After connecting with a Facebook account, the algorithm analyzes liked ideological posts and shares web content such as pages, people, and groups that directly counteract them.

Whether or not this campaign became widespread, there’s little doubt that it is inspiring. I personally installed the “Like What You Hate” app onto my Facebook account and it forced me to step out of my comfort zone. Similarly, brands need to use these platforms to encourage users to broaden their ways of thinking about the world and the social media outlets that influence these thoughts.

These projects were obviously easier said than done. As with any creative endeavors, there were lessons and setbacks along the way.

But the nature of storytelling is always evolving. Audiences want to be engaged not forced to sit through the same cookie-cutter material. Only when brands commit to exploring new frontiers in digital storytelling can we dream the future of writing, directing, cinematography, editing, and distribution into reality.