“The King of the North is Coming,” declares a New Balance billboard along the Interstate in Oakland near the home court of reigning NBA champions, the Golden State Warriors. 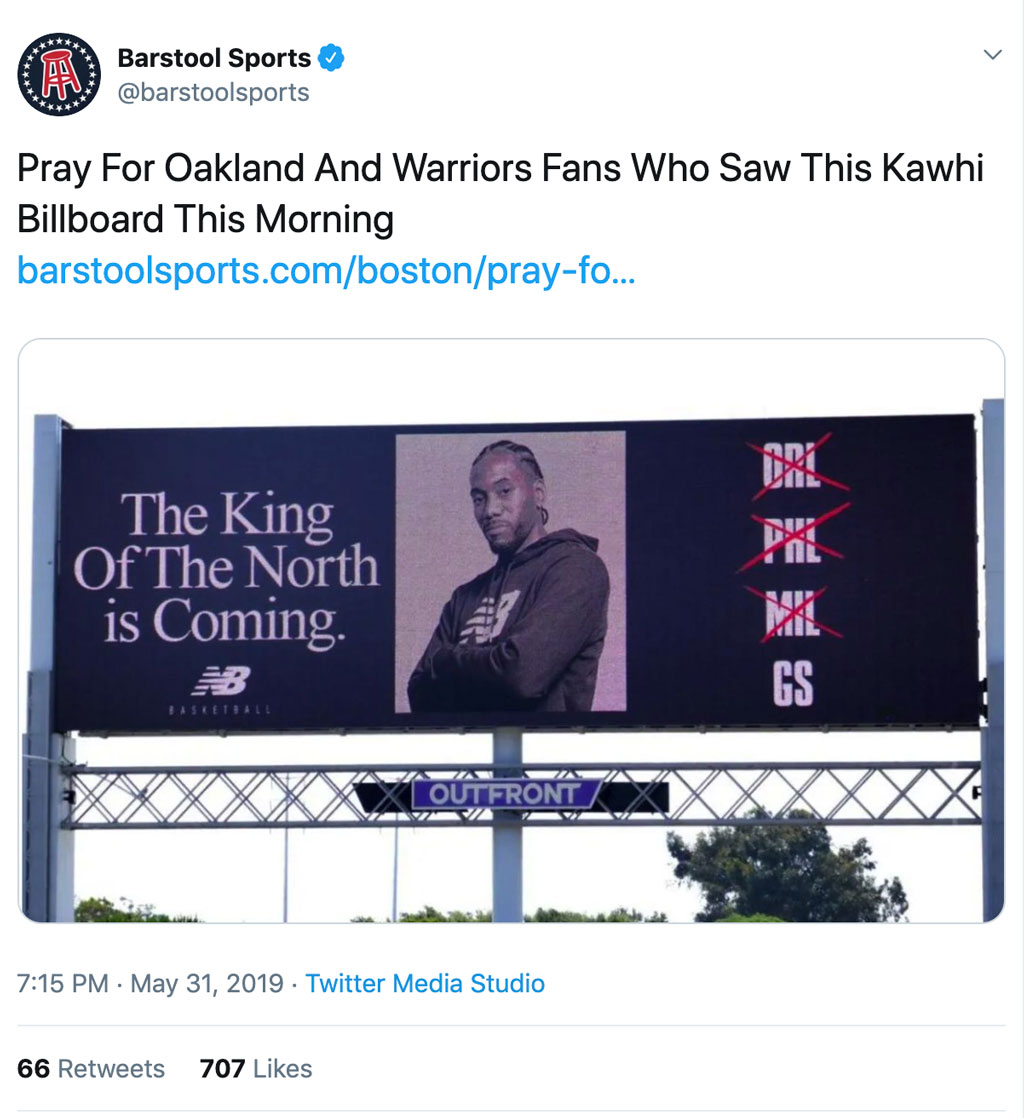 The not-subtle sign lists the three NBA teams eliminated by the Raptors en route to the pro-basketball finals.

Last year, the loaded Golden State Warriors blanked the Cleveland Cavaliers and their star LeBron (The King) James four games to none. James then signed with the Los Angeles Lakers, a team that did not make the playoffs this year.

The New Balance billboard appeared in Oakland as the Raptors beat the Warriors in Game One in Toronto, with Leonard scoring a modest 23 points. On Sunday (June 2), Leonard’s 34 points led the Raptors in a Game Two loss to Golden State. The NBA Finals – tied 1-1 — move Oakland for Games Three and Four, starting Wednesday (June 5). 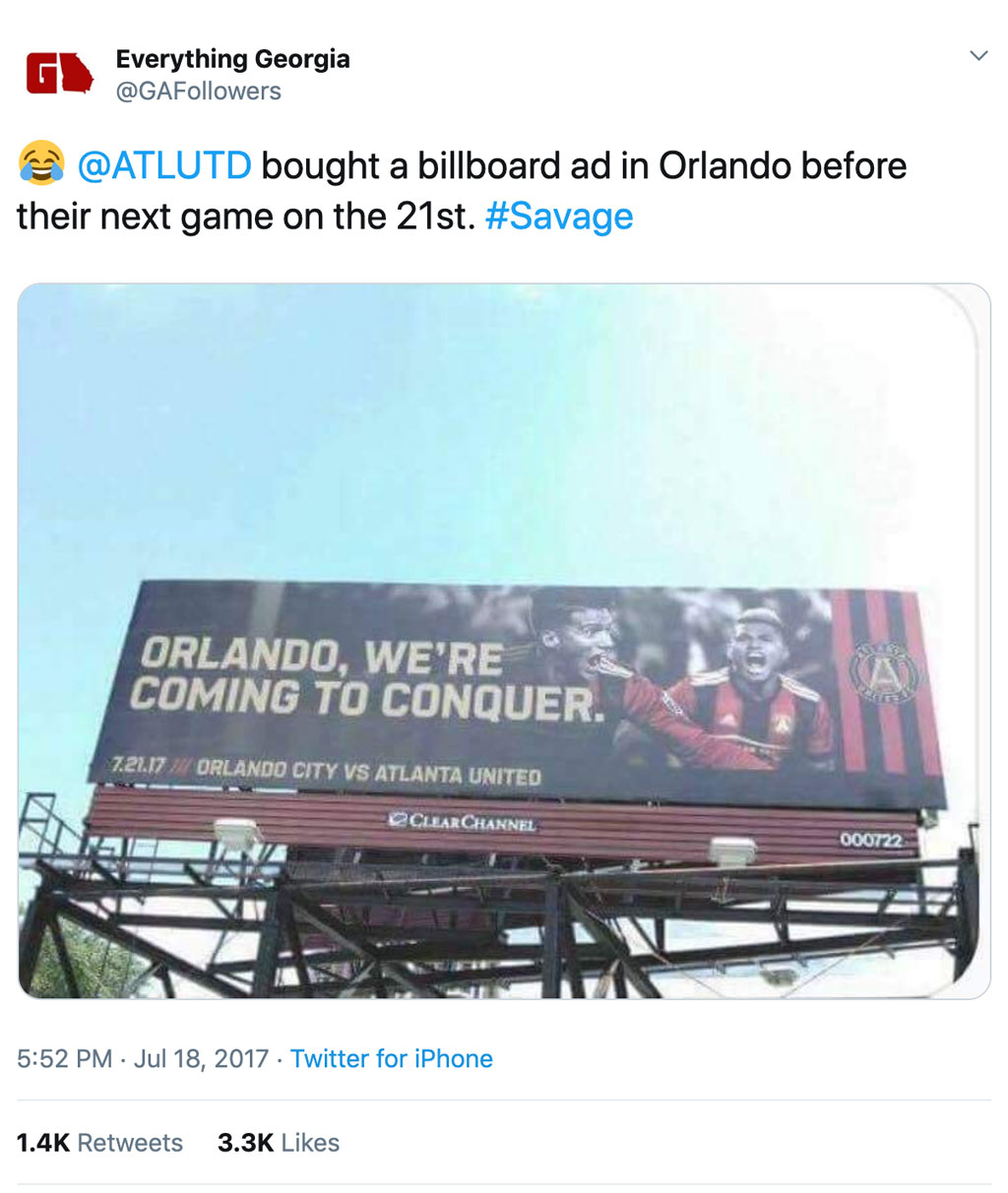 Pepsi blanketed out of home ad space before the 2019 Super Bowl in Atlanta, hometown of Coca-Cola (“Look Who’s in Town for Super Bowl LIII”). Pepsi’s pre-game domination prompted a Georgia lawmaker to defend Coke on the floor of the state Legislature, with Coke bottle-props on his desk. 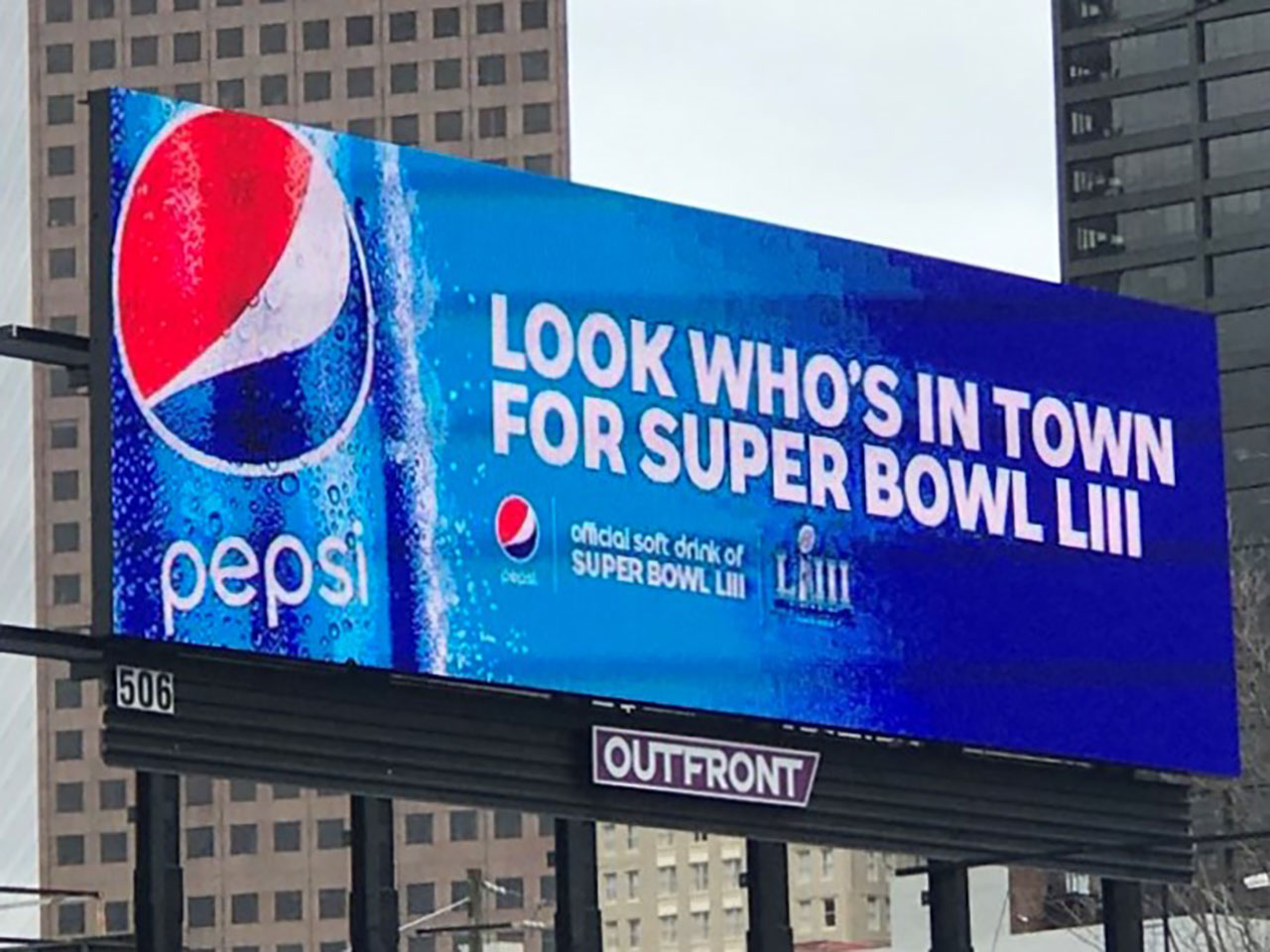 Confidence is key ingredient of the billboard taunt tactic. But failed certitude can inspire creative rejoinders.

Before the New England Patriots-Baltimore Ravens AFC Championship game in Foxboro on January 20, 2013, billboards in the Boston area counted down to a fictional “retirement party” for aging Baltimore Ravens’ linebacker Ray Lewis, coinciding with game day. 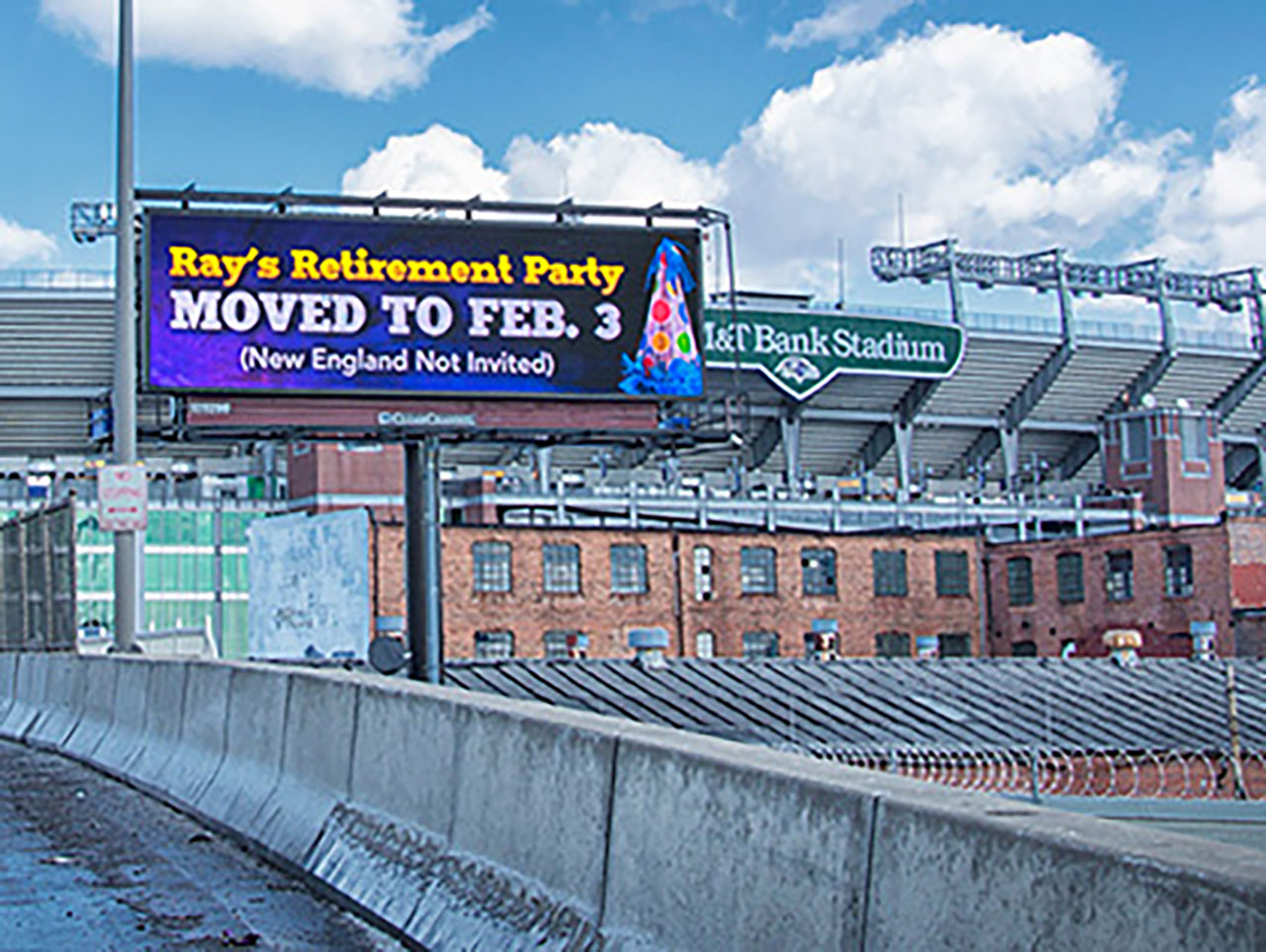 Later that year, in the NFL regular season, Seattle Seahawks fans hired a plane to fly over Candlestick Park with a banner that said “The Sixth Man.” San Francisco fans retaliated with a billboard south of Seattle that asked “Got Lombardis?” (a gloating reference to San Francisco’s five Super Bowl wins). 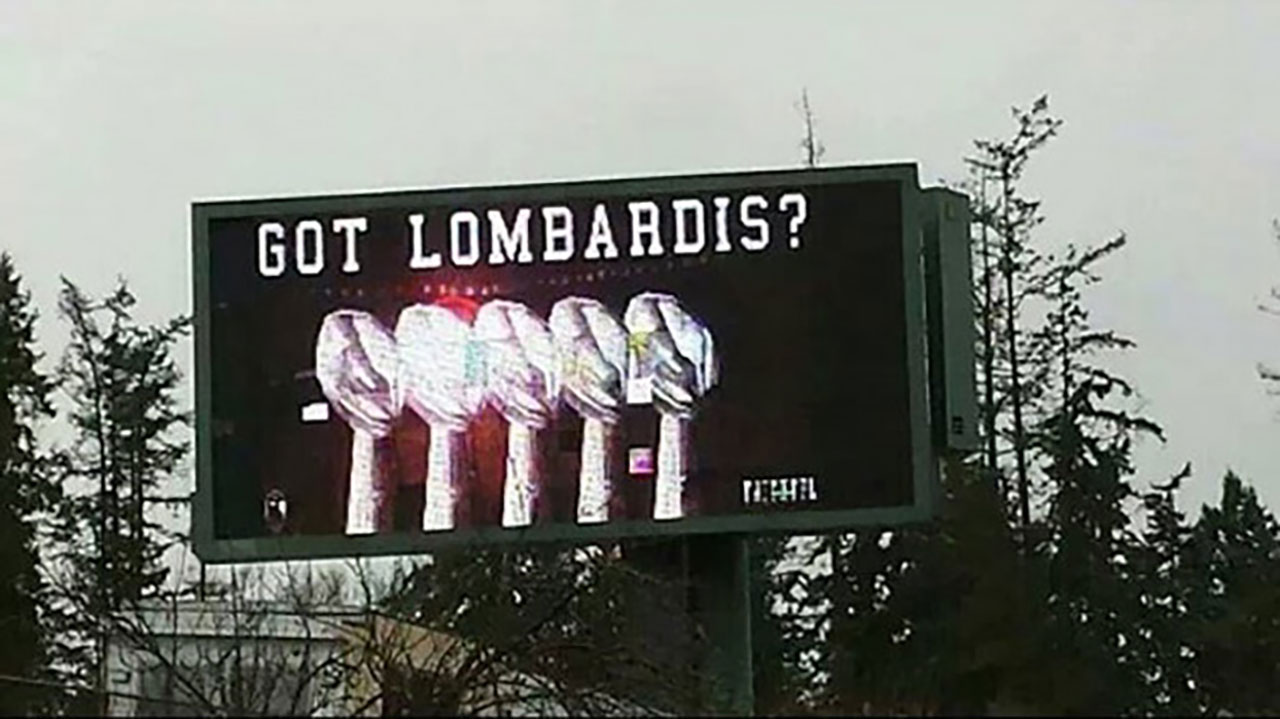 “The billboard cost $7,000, and the Niners fans who put it up actually have raised more than $11,000. What are they doing with the difference? They’re donating it to the Seattle Children’s Hospital. Nice, but true, bitter rivals would not do that. If this were Duke and North Carolina, one school would order a thousand pizzas and have them delivered to the other school’s children’s hospital without paying.”