Supermodel and entrepreneur Iman has had her fair share of successes over her extensive career. Her work in the fashion world, beauty industry and philanthropic outreach have established her as a strong icon and role model. For what she calls her “third act” in life, she is pairing up with global humanitarian organization Care to humanize the stories of refugees around the world.

Michelle Nunn, CEO of Care USA, sits down with the mogul to detail her own experience as a refugee as well as the work that Care is actively involved in to bring aid to the places that need it the most.

Growing up in Mogadishu, Somalia, Iman was able to live a privileged life as the daughter of activists and an ambassador. She attended boarding school in Egypt, spoke three languages and was set to pursue the path of her trailblazing parents. It all changed in 1969 when a coup broke out in her home of Somalia.

Life became too dangerous for her family to remain, and so they fled the country with only the clothes on their back to find safety. In that moment, she became a refugee. Displaced, leaving her home not out of want, but out of need, and thus becoming vulnerable to the dangers that come with being a young girl on her own.

Her life could have taken a dark turn after this transition. However, with the help of NGOs, she was able to find the light. Describing the organizations as the angels in her life, she details how their involvement allowed her to continue to attend school, find a job as a translator and eventually move on to college to study political science.

“The basis of what happened of those things, those needs and being taken care of, being seen, being heard, being protected, never left me,” she says.

The care and compassion that she experienced is what she hopes to bring to refugees of today with this partnership. Her directive is to humanize refugees through storytelling, something that can get lost within the politics. Nunn adds that understanding their extraordinary human stories will increase global recognition and in turn, humanitarian response.

Nunn described some of the aid that Care is providing today, including Yemen, Uganda and Jordan. She states that currently, there are 24 million people who are in need, making it the biggest humanitarian crisis in the world today. There have also been 1.3 million refugees accepted in Uganda over the last few years, which has brought on challenges of childbirth survival rates.

One of the main directives that Care takes in places such as those is reinforcing financial stability among families in order to keep children involved in school. This solution reaps incredible benefits, as it provides a safe space for children and allows them to create the building blocks they need to create a better future.

“Parents don’t care how long they live, as long as their children can have a better future,” Iman says on the subject.

Care combined this youth engagement with their push for storytelling in Jordan. There, they are creating a film school where young refugees have learned to produce their own documentaries and tell their own stories. By working to spread more stories such as these, Nunn and Iman are hopeful that their efforts will help to change public attitudes towards refugees.

“What we do now is going to be used as our stories, the human stories from years and years to come,” says Iman. 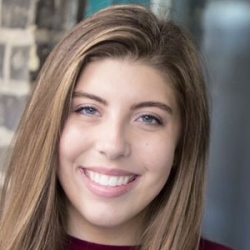 Writer at Advertising Week
Julia is a senior at the University of Wisconsin-Madison in the School of Journalism and Mass Communication, following the track of strategic communication while earning a minor in digital studies. After graduation, she hopes to work in media and public relations. She's very excited to be attending Advertising Week New York and is hopeful for the experiences it will bring!