For the larger part of the past decade, it’s felt like we’re on the precipice of unprecedented change. Not just as human beings and as a planet, but also as an industry.

The rate at which good work becomes outdated has gotten faster, clients increasingly ask for work that “breaks the playbook” and agencies respond with “hacks” of all varieties (like Frito Lay’s anti-ad ad), the white space for “never been done before” seems to be narrowing, and the proliferation of screens makes it seem impossible to breakthrough.

In response, many have predicted a reckoning for an industry that seems to have reached its peak. Some say the traditional agency is on its way out, or that the holding company model is dead. Some say the future is in social, others, in big data. What most predictions have in common is that advertising, at least as we know it, is dead.

As the COVID-19 crisis has progressed, and I’m left feeling that life as we know it has irreversibly changed, this question of the industry’s future has come–at least for me–even further into the fore. But the outsized role brands have played in the COVID-19 outbreak is an encouraging sign that while the jury might be out on ads, the brands are far from dead.

Consumers are in a tailspin without “non-essential” goods. Even in a moment that should serve as a reset of what’s “important,” consumers are aching for their favorite brands back.

Not only are brands being called upon to manufacture badly needed PPE and donating money or supplies, but they are also being looked to by consumers to respond. On the one hand, brands can be fiercely critiqued for responses that get it wrong, but on the other, a response is expected–failing to produce one can be catastrophic for them post-COVID.

Most marketers–and countless new agency guidelines–have taken this to mean that brands need only back up what they say with what they do, or provide some utility to consumers. While it’s true that empty words will no longer cut it and consumers are beginning to see through gestures of goodwill, the chorus of “we’re in this together-s” and “now more than ever-s” are still falling flat, not because they’re not backed up with brand action, but because they hedge on platitudes when consumers facing an uncertain future crave a brand with something to say.

In times like this, it’s no wonder brands are increasingly skeptical of ads and agency creativity to solve business problems and make brands matter. And they’d be right if creativity solely meant a feel-good long-form film or a “buzz-building” stunt — there’s not much that, say, the death of Mr. Peanut or flipping McDonald’s arches can do for the business when your brand’s problems are the result of a global pandemic. At best, it’s mildly entertaining, at its worst it feels tone-deaf.

But the UN’s first-ever open call for creatives to help solve a health crisis, and “Flatten The Curve’s” adoption as a ubiquitous rallying cry akin to WWII’s “Keep Calm and Carry On” tells me that both narratives and creative ideas still matter, advertisers and brands just haven’t stumbled on the right ones. While we still haven’t landed on “that” image that will sum up this crisis in poignant visual terms for COVID, the sheer desire for one point to a culture that is not only eager for self-definition but reliant on it.

The work of ads over the past two decades, which tried to get brands “into the culture,” have established brands like the ones to tell Americans the story of themselves (think: Always “Like a Girl”; Levi’s “Go Forth to Work”; or Coke’s 2014 multi-lingual “America the Beautiful”).
COVID has only made this reality more clear: brands play an overwhelming role in governing not only what Americans buy, but how they feel, what they think, and their sense of the zeitgeist.

The stage is set for brands with a powerful vision for the future and compelling articulation of who they are (backed up with action, not just ads) to set the course of culture and shape the new normal. At the end of the day, brands are only what they say and what they do. To avoid backlash, those two need to match, but to matter, they need to add up to something. For consumers, it’s about more than the sum of what you say and do, but what you stand for.

While this might be the peak for ads it’s just the start for big, powerful ideas

So instead of trying to constantly break the rules of the game we’ve been playing for decades–finding more creative, more “innovative” ways to say more of the same things–it’s time to play a new game entirely: big ideas that are more than just a campaign idea or the way a brand talks about its products or even about itself, but give meaning to whatever a brand does. Ideas that do more than find a “credible” cause to check the CSR box, but organize every inch of a brand’s business around a common purpose, and guide every decision from the products it develops to the internal policies it sets. An idea with vision, ambition, and a bold set of values and principles to get us there. These ideas have the power to not just make your brand matter, but galvanize consumers toward a new future.

For example, take JL’s work with Volkswagen. What we’re most proud of is not a talked-about manifesto film (though that doesn’t hurt), but a big brand idea, “Drive Bigger.” It does more than sell vehicles but rallies the entire organization around a common vision for the future: one that confronts a culture of putting people over profits, and prioritizes the “we” over the “me.” With Drive Bigger in mind, the answers to the hard decisions–especially in times of crisis–become clearer and what the brand stands for becomes more powerful. It’s easy to make a film talking about the brand’s commitment to electric vehicles, it’s harder to say “hold us to it.”

If COVID has taught the industry anything, it’s that when brands speak and behave as the change they want to see in the world, they don’t need ads. They become their best ad for themselves. 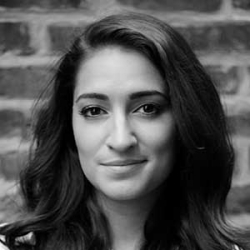 Adriana Mariella
Strategist at Johannes Leonardo
Adriana Mariella is a Strategist at Johannes Leonardo and a Culture & Media Studies academic. She writes about the intersection of advertising, culture, and media and is published in the International Journal of Humanities and Cultural Studies (2017), The Art of Artertainment: Nobrow, American Style (Vernon Press, 2019), and a forthcoming anthology Feeding Cultural Fear: Essays on Films During a Time of Transition, 1998-2020 (McFarland Press, expected 2020). She received her Master’s in Humanities and Social Thought from New York University in 2016.