Post Federal election, experts are tipping a surge in consumer confidence backed by an increase to the national minimum wage. This, coupled with the fresh, new financial year, means there has never been a better time to position your brand for growth. And when it comes to choosing how to allocate your media investment, there’s only one place to start: attention.

Attention is critical to sales impact. An ad can only persuade people to buy your products if they actually notice it. So how do you get the attention of consumers?

First, people need to be actively looking at your ads. Passive viewing – seeing the ad out the corner of the eye or rapidly scrolling past it on a social media newsfeed – does have an impact as it contributes to the subconscious processing of advertising, but it doesn’t come close to the effect of active viewing.

According to The Benchmark Series, a research program conducted by Professor Karen Nelson-Field, attention varies greatly across different platforms. Benchmark, an independent, large-scale in-home study that explored how Australians engage with advertising across platforms and devices, found a stark difference in the levels of active viewing based on the platform ads were displayed. While 58% of study participants actively viewed ads on TV, only 31% did the same for YouTube. That figure was even lower for Facebook at 4%. 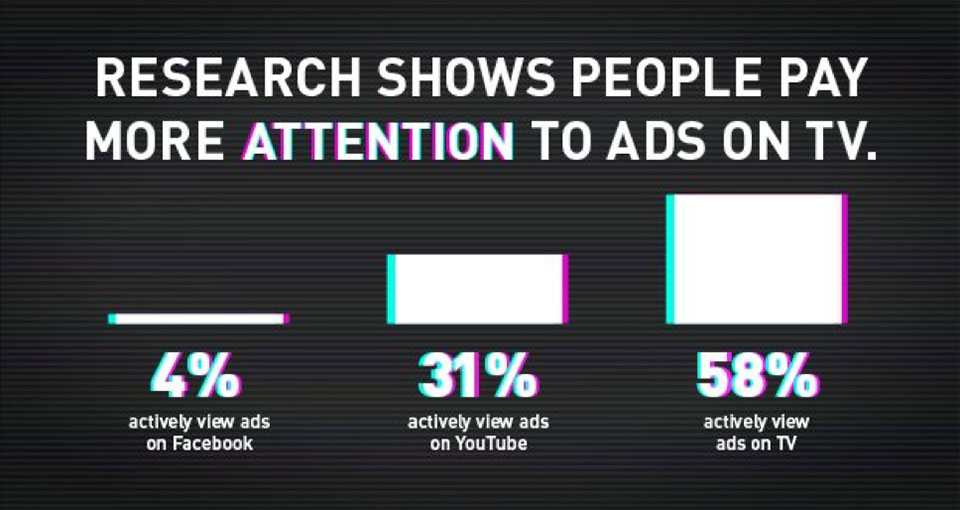 And this percentage matters, particularly when its sales impact was assessed. Professor Nelson-Field and her team quantified sales impact using a metric called STAS- Short Term Advertising Strength.  STAS uses a discrete choice modelling exercise that replicates the experience of being in a store. The exercise found that active viewing on TV generated a STAS of 144 while for Facebook, that figure is 118 and YouTube is even lower at 116 (a score of 100 indicated no short term ad impact).

Attention equals sales and when it comes to video advertising, the coverage of the screen links directly back to grabbing and holding people’s attention. Benchmark found that ads which are fully rendered – taking up 100% of a screen’s pixels – generate twice the sales impact of ads that only fill half the screen. Previously, the standard set by the Media Rating Council for viewability was just 50% but aligned with this research, the industry body has proposed an increase to 100%. That’s how important attention is.

Drilling down by device paints an even more dramatic picture in terms of STAS. While TV viewed on a the traditional loungeroom television screen generates a STAS of 144, TV viewed on a PC or laptop scores 153 and TV on a mobile screen is 161. By comparison, Facebook on PC has a STAS of just 118 while the Facebook on mobile STAS is 121. For YouTube, we’re looking at STAS scores of 116 on PC and 137 on mobile.

The takeaway here is that if you want people’s attention, there’s only one medium that fits the bill and that is TV. On any device – PC, mobile or TV screen – TV renders 100% of pixels 100% of the time driving more attention and a greater sales impact.

Not all platforms are created equal – TV clearly has the jump on social video but if you are thinking about chasing attention online, your best bet is BVOD.

Broadcaster Video on Demand or BVOD refers to broadcast quality content delivered via set top boxes, PCs and apps on mobile and tablet devices. It’s the content your target audience knows and loves only delivered a little differently. As part of the Benchmark research, Professor Nelson-Field set out to determine the best online video combination with TV and found that advertising on TV and broadcaster video generates twice the sales impact of TV paired with social video.

Social video may be a tempting alternative but the temptation comes at a cost with the Benchmark research also finding that by combining a high-performance platform such as TV with a lower performing platform, the STAS could actually be reduced below the result that would have been achieved with a single exposure on the better performing option.

So, as you rise to meet the challenge of growth for your brand, demand media channels that deliver attention. Notice. The difference.