Maria Bartiromo is a world-renowned business news anchor. She is the anchor of Mornings with Maria and Maria Bartiromo’s Wall Street on the Fox Business network. 25 years ago this year, however, Maria was the first person to report live from the floor of the New York Stock Exchange. It was a moment in reporting history that will remain etched in time forever. We caught up with her ahead of Advertising Week’s Virtual Event AW2020 to learn about the barriers she shattered and asked for a few pieces of advice we think you’ll find useful.

AW360: Maria, thanks so much for doing this. We’re talking 25 years on from the first time you reported on the floor of the New York Stock Exchange. You’ve been quoted as saying it was a “Wall Street boys’ club”. Can you expand what it was like at the time?

It was 80% men on the floor of the NYSE but more than that, it was something that had not been done before. So, it was new to all involved. The traders who had kept their business transactions private were suddenly faced with a woman with a camera in their face. I had to establish credibility so they would give me information and am proud to have been able to help democratize information for investors. Getting real-time info out enabled small investors to be on the same playing field as large big money institutions. 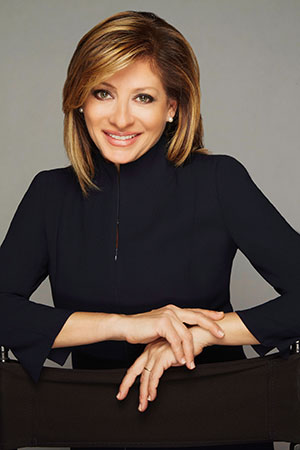 AW360: What do you recall from the very first day you went live and what was the response?

A lot of people rushing around. It was very busy. Traders were bumping into me constantly and I had to learn what exactly they were doing and how business was transacted to be able to communicate to the 100 million investors who deserved to better understand what was happening to their money.

AW360: What were the most significant moments of your reporting?

I was fortunate to have a front-row seat to several cycles in our economy over more than 2 decades. First, I am very proud of being able to break open the morning call. At that time, individual investors did not have access to some of the big market calls by Wall Street analysts that would move the market. I was able to report the big market-moving calls by calling my sources on trading desks every morning and getting that info out early. I witnessed and participated in the individual investor revolution where small investors knew they could arm themselves with information and invest for themselves. Then came the consolidation of discount brokers to compete for the individual’s business, and the dotcom boom when Amazon and Google first went public in the 90s. And of course, September 11th, which was the scariest day for all of us. As well as the election of Bill Clinton, George W Bush, Barack Obama, and Donald Trump, all defining moments for our economy and society in different ways.

AW360: Can you explain what business news was like when you first started as an intern at CNN, and compare that to where it is now?

When I started right out of college at New York University, business television was in its infancy. The broad public was just beginning to understand the need for information to make investment decisions. A multi-year bull market was just beginning. My entry-level job right out of college was at CNN business news and I learned how to cover a news event as it was happening. In this case, it was the first Gulf War. I was a production assistant in New York working for Lou Dobbs. We were covering the economic impact of the war – including the impact on incredibly volatile oil markets. I watched CNN correspondent Bernard Shaw under a bed in Baghdad with his hotel windows open and we heard the bombs going off live. This was very innovative, and no other media was doing what Ted Turner’s CNN was doing. Every network reported news nightly at 6:30 pm. But CNN was changing everything, reporting on the war as it was happening. I learned how to do that firsthand. and it served me well just a few years later when I became the first person to broadcast from the floor of the NYSE to cover markets while they were trading, and anything could happen. I have only done live reporting ever since.

AW360: We’ve interviewed numerous world-class business anchors and journalists on the Great Minds podcast – Betty Liu and Manisha Tank being just a couple of them. All not only referenced you but highlighted how pivotal you were as a figurehead to look up to as they were rising through the ranks. Did you see yourself as that person? Or were you just trying to do the best work you possibly could?

I wasn’t aware of the message it was sending at the time And I wasn’t thinking about that. I was thinking about working hard, making sure I knew my stuff so no one could push me around breaking ground for the viewer. Later in my career, many women mentioned I was a role model for them, and I was so honored. I love hearing from parents asking me about their young girls who we’re trying to break out. I think at the time it motivates women because they saw me – a young woman – in a sea of suits at the nucleus of male-dominated Wall Street, and they thought to themselves- if she can do that, well maybe I can do that. I will do that too. And I am so humbled and grateful to know this now.

AW360: What advice would you give to young, ambitious women with concerns their gender may stop them from getting to where they’d like to be professionally?

My biggest secret which is not much of a secret anymore is to work incredibly hard. There are no short cuts. So, outwork everyone. You will learn a ton and be best positioned to get the job you want. Also, love what you do. Take money out of the equation when you are beginning the journey. Only do something you love. And of course, my final piece of advice is always to do the right thing. We all know what is right and what is wrong when a dilemma comes calling. Commit today to do the right thing in all situations. Don’t be fooled into thinking your reputation doesn’t follow you. Your reputation is the only thing that will follow you everywhere. So, protect it and cherish it.